Erzurum Opens Up To The World With Its New Face

The corporate identity of Erzurum was created in context with the branding efforts carried out by theGovernorship of Erzurum. The logo and slogan of the project, initiated by Governor Ahmet Altıparmak, which would represent the city locally and internationally was determined at the meeting.

The Governor, who stated that each city has a unique history and culture, said that they were starting out with an assertive logo and slogan and added that the corporate identity project attracted a lot of attention on social media and was given the thumbs up by experts. The Governor, who stated that they were going to advertise Erzurum the way it deserved with this advertising campaign, said that the official logo of Erzurum could be used by all public and private institutions and NGOs. 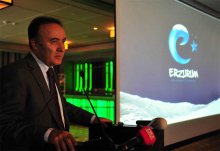